CHAIR’S 3 MINUTES
Published in December 4, 2016
By MIKE WHITE, for the Maui News

Last week, the Maui County Council’s Infrastructure and Environmental Management Committee passed a bill that would prohibit the use of polystyrene food service containers throughout Maui County starting on July 1, 2018, if approved by the full council. 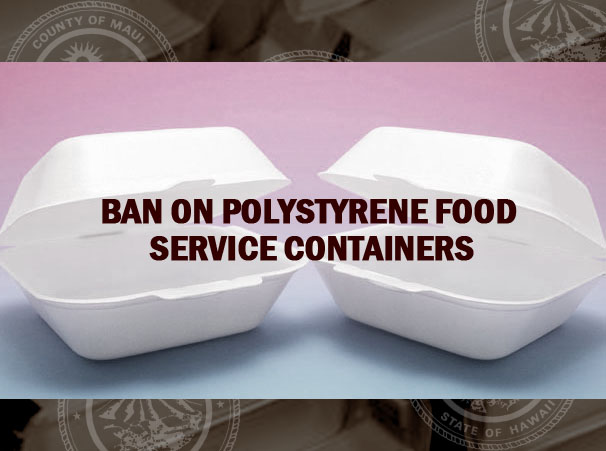 Supporters of the bill have touted the ban as helping to better the environment, because of polystyrene’s lightweight nature and its ability to break down into smaller fragments, potentially causing harm to both marine animals and the avian population.

Exemptions are written into the bill for packaging situations unique to a food provider where compliance would cause significant financial hardship or leave no affordable alternatives. Similar to the plastic bag prohibition, this proposal would require changes to our daily habits, one of them to an island staple, the plate lunch.

It remains critical to hear from residents and everyday users in the business community to address whether this legislation is workable and if any further amendments are needed before passage. I encourage feedback either in person or via email at county.clerk@mauicounty.us.

The bill will likely be heard for first reading on Dec. 16 at 9 a.m. in the Council Chambers. The full text of the bill can be viewed on our website at mauicounty.us/polystyrene.

As we near the end of the current term, the council is paying tribute to departing Council Members Gladys Baisa, Don Couch and Mike Victorino this month.

Resolutions for Couch and Victorino will be considered on Dec. 16.

As reported by the Land Use Committee, the project is on 122.6 acres at the corner of Kuihelani Highway and East Waiko Road in Waikapu. The master-planned residential community will include up to 950 single-family and multifamily homes, with parks, open space and commercial uses.

The project is seen as a means to provide a range of housing opportunities for Maui’s working families. Increasing the stock of affordable housing is one of the council’s top priorities.

The council this month is also considering a bill from the Planning Committee intended to address the housing shortage by encouraging the development of affordable accessory dwelling structures, sometimes called cottages or ohana units. The Planning Committee has also asked the new council to take up a number of unresolved policy proposals generated by a temporary investigative group that studied affordable housing.

Lori Sablas, a retired cultural specialist, is a nominee to the Maui County Cultural Resources Commission, and Kelly Pearson, the CEO of Boys and Girls Clubs of Maui, is a nominee for the Commission on Children and Youth. The council is slated to vote on both nominations at the last meeting of the current council term.

With the public’s help, the council has achieved much this term. But the work never ends. There continues to be more to do in the coming term for the six returning and three new council members who are ready to serve.

* Mike White is chairman of the Maui County Council. He holds the council seat for the Paia-Haiku-Makawao residency area. “Chair’s 3 Minutes” is a weekly column to explain the latest news on county legislative matters. Go to mauicounty.us for more information.