It has been a roller coaster of a ride at the state Legislature this past week, and as of this column’s deadline, it may not be over yet.

House and Senate members have been in a tug of war over funding Oahu’s controversial rail project. In the crossfire, the Neighbor Islands have been placed between a rock and a hard place.

In the latest proposal, the Senate passed a bill funding rail with a general excise tax surcharge for Oahu residents and a reduction in the counties’ share of the transient accommodations tax from $103 to $93 million. In the House, a bill was passed to maintain the counties’ TAT share at $103 million, but the tax on visitor accommodations across the state would increase by 1 percent, with the additional revenues being used for rail.

Although it is an additional tax on visitors, I still ask: How is this proposal fair? Neighbor Island counties will get no additional revenues or benefit for a tax generated on our islands.

Kauai, Maui and Hawaii counties generate 51.8 percent ($251 million) of the TAT revenue. Oahu generates 48.2 percent ($234 million), and any increases to the tax rate charged on visitor accommodations should apply only to those on Oahu if it will be used for rail. Neighbor Islands should not have to bail Oahu out of a problem its city leaders created. 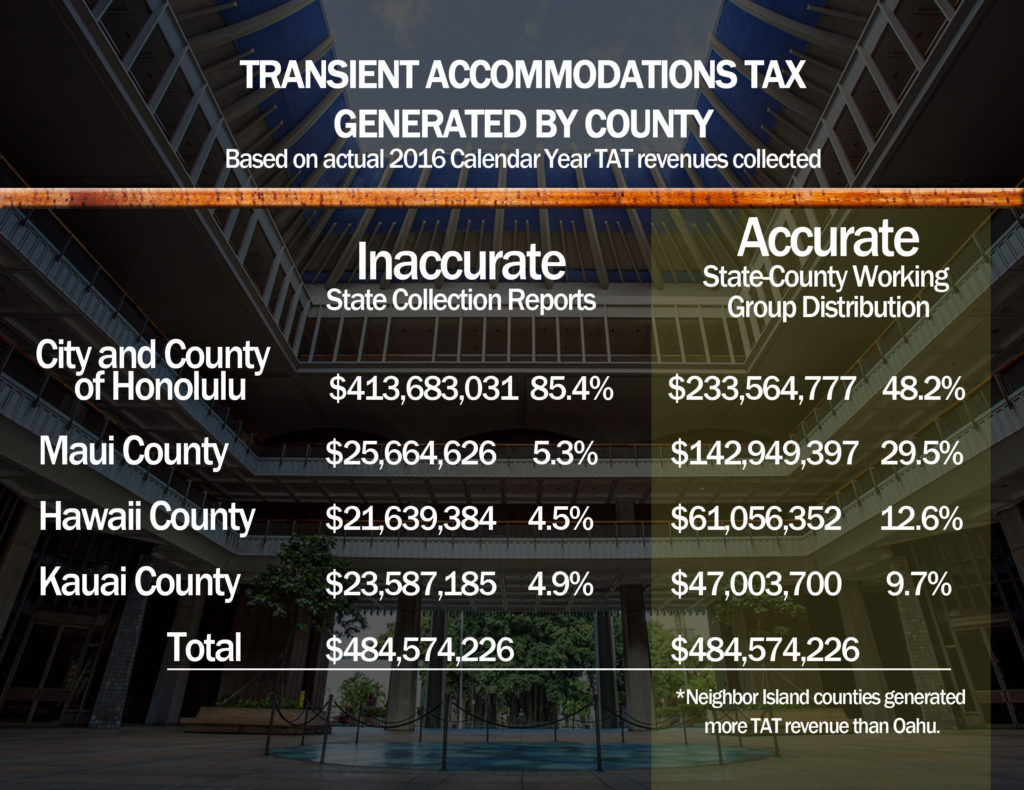 Since both chambers did not agree on an identical version of a bill, the measure is currently dead, but a special or extended session could be called. The drama is not yet over, but it seems under most scenarios, the Neighbor Islands lose. I urge the Legislature to reconsider its options and be mindful of islands other than Oahu.

Despite these actions that bring uncertainty to the counties for the upcoming fiscal year, the County Council’s Budget and Finance Committee on Monday adjourned a monthlong review and passed a $704.8 million fiscal year 2018 budget, which is $15.4 million less than the mayor’s proposal. The budget keeps the Waiehu Municipal Golf Course open and additional funds will be dedicated to road resurfacing, as requested by the public. A $2.5 million investment also will be made to combat invasive species and protect Maui County’s ecosystem.

With the conclusion of the budget session, the council will return to a regular meeting schedule, but will begin with a special meeting at 9 a.m. Monday in the Council Chambers to consider Bill 127 (2016), relating to the polystyrene food container ban.

Much like public discussions regarding prior bans on plastic shopping bags, supporters and opponents of a polystyrene foam container ban have presented varying concerns.

Proponents cite the need to combat the problem of plastic marine debris with its negative effect on ocean life and advocate for the use of biodegradable, compostable alternatives. Opponents argue for a market-based approach and warn that prohibition of the use of polystyrene containers will unduly burden food vendors, grocers, restaurants and small-business owners, who claim that polystyrene foam containers are a reliable, cost-effective product that protects consumers from burns and spills.

In 2014, a council task force report listed relevant issues on both sides of the debate, but the group was unable to reach a clear consensus.

It is now the job of the council to evaluate the competing claims and decide whether Bill 127 is the best proposal for our county. For its meeting on Monday, the council has invited experts to speak on the efficacy and science behind polystyrene bans and provide samples of various food containers for the council and public to review.

A polystyrene container ban would be the first in Hawaii and would take effect on July 1, 2018. The Legislature considered similar bills, which failed to advance this year. The Hawaii County Council is also considering a similar measure.

Your input is critical. Testimony may be provided at the meeting or by email to county.clerk@mauicounty.us, referencing Bill 127 (2016).

More information is available at mauicounty.us/polystyrene.

* Mike White is chairman of the Maui County Council. He holds the council seat for the Paia-Haiku-Makawao residency area. “Chair’s 3 Minutes” is a weekly column to explain the latest news on county legislative matters. Go to mauicounty.us for more information.