I’ve had the privilege of representing county governments during the 2016 state legislative session, which ends Thursday.

As president of the Hawaii State Association of Counties and chair of the Maui County Council’s Policy and Intergovernmental Affairs Committee, I’ve worked with council members and mayors from all four counties to ensure state officials understand our message. County governments – and the taxpayers and residents they serve – play an important role in Hawaii’s economy and deserve fair treatment.

I’m confident state legislators received ample information to understand the importance of keeping more transient accommodations tax revenue in the counties where it is generated. This was only possible by a coordinated effort among members of the Maui County, Hawaii County and Kauai County councils and the Honolulu City Council.

At the start of the legislative session, HSAC proposed that the Hawaii Revised Statutes be amended to ban smoking in motor vehicles when a child is present. I’m pleased to report such legislation, in the form of Senate Bill 2083, has been passed by both the House of Representatives and the Senate.

As I testified, “Secondhand smoke in the confined space of an automobile is hazardous, and kids deserve protection.” I look forward to Gov. David Ige signing SB 2083 into law.

In addition, a resolution proposed by HSAC – urging Congress to propose a constitutional amendment overturning the Supreme Court decision allowing unlimited campaign spending by corporations – has been adopted without objection by the House and the Senate. My testimony to the legislative committee stated: “The ruling in Citizens United threatens to invalidate the authority of Congress and the states to regulate the influence of corporate power on the political system.”

Regardless of the final decisions made by the Legislature on TAT and other important issues this year, local governments in Hawaii will continue to provide the core services that keep our state strong, including public safety, parks, water, roads and wastewater. Counties are resilient.

That message will resonate at HSAC’s annual conference, hosted by the Hawaii County Council, June 22-24. The conference theme is “Wind, Waves and Fire: Counties on the Forefront.” 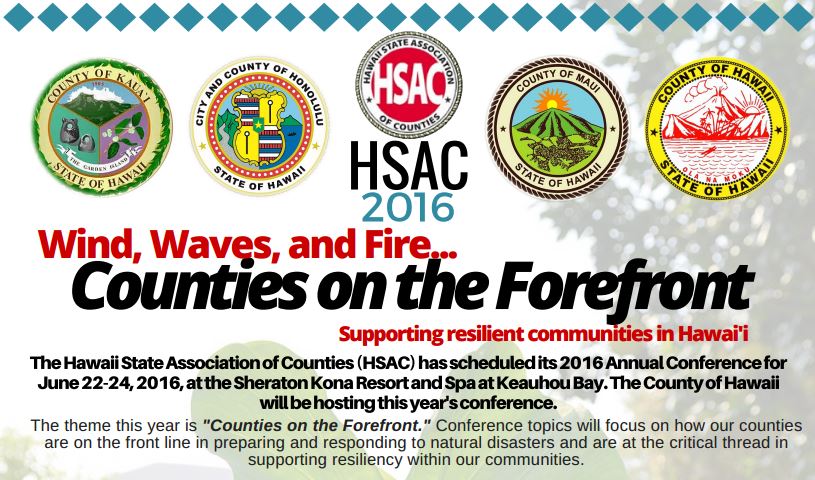 County officials and interested members of the public will discuss county governments’ constant preparations to respond to any and all types of crises. Visit hicounties.com for more information on HSAC and the conference.

The National Association of Counties’ annual conference will be hosted by the Los Angeles County Board of Supervisors in Long Beach, Calif., July 22-25. As a NACo board member, I look forward to attending this prestigious educational event, with the goal of crafting more well-informed legislation back home in Maui County.

Meanwhile, my council committee returns to work this month, now that the council’s fiscal year 2017 budget session is concluding.

The PIA Committee has jurisdiction over amendments to the County Charter, which is the County of Maui’s foundational document. I intend to carefully review all the charter amendments submitted by my colleagues or the public and decide which are worthy of a public discussion in committee.

To place a proposed charter amendment on the general election ballot, the council needs to adopt a resolution by a two-thirds vote on two readings. Members of the public can also propose charter amendments, pursuant to standards established in Article 14 of the charter.

The committee also looks forward to considering the mayor’s nominations to fill any vacancies on boards and commissions. We’ve been informed there’s a new vacancy on the Board of Water Supply, and I urge all interested members of the public to consider submitting an application to Mayor Alan Arakawa.