Exactly a week ago – on a Sunday afternoon – the County Council’s Budget and Finance Committee began wrapping up its arduous work on the fiscal year 2016 budget by proposing a $621 million county budget, nearly $79 million lower than the mayor’s proposal. Lower real property tax rates were also supported by committee members, mainly due to a 13.5 percent increase in overall property values. 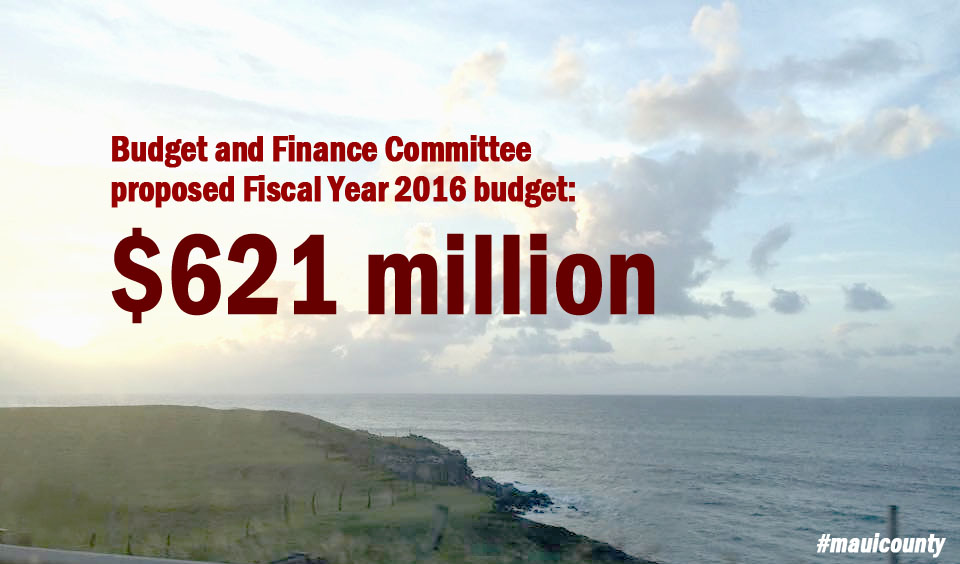 The committee was thorough and cautious in reviewing the mayor’s budget requests for the fiscal year that begins July 1. For example, 50 expansion positions were requested, and the committee ultimately found only 15 were warranted.

As a result of its careful scrutiny, the committee was able to lower taxes this coming year and reduce county borrowing, while still making judicious public investments.

The version of the budget approved by the committee includes funding for a long-awaited parking structure at the Wailuku Municipal Parking Lot and for acquiring the land under the Kula Community Center and the Waiakoa Gymnasium.

In response to numerous calls for road repairs in Haiku, a $1.4 appropriation was included for the second phase of the pavement project at Kokomo Road and Makawao Avenue. Improvements for the Haleakala Highway intersection at Makawao Avenue are also slotted for funding.

Many in the community expressed their desire to acquire parcels fronting the Jaws surf break on Maui’s north shore and the committee included it in the budget under the county’s Open Space Fund.

The committee also provided funding to ensure the county’s interests are represented by an experienced professional negotiator during future statewide labor negotiations.

Countywide, council members supported many other improvements for our parks, roads, environment and facilities. After all, these investments are important not only to our residents, but also to support our visitor-driven economy.

I thank Budget and Finance Committee Chair Riki Hokama for his leadership in ensuring the county remains fiscally sound. All council members have worked hard in this budget session to assure accountability and fiscal responsibility of your money. As council chair, I look forward to supporting the budget through the next steps in the process.

The committee’s budget proposal will be considered on first reading by the council on May 26. Also, the council will conduct public hearings on fuel, vehicle weight and real property tax rates this Friday starting at 9 a.m.

And before I conclude, I would like to wish a Happy Mother’s Day to all moms!

* Mike White is chair of the Maui County Council and vice chair of the council’s Budget and Finance Committee. He holds the council seat for the Paia-Haiku-Makawao residency area. “Chair’s 3 Minutes” is a weekly column to explain the latest news on county legislative matters. Go to MauiCounty.us for more information.