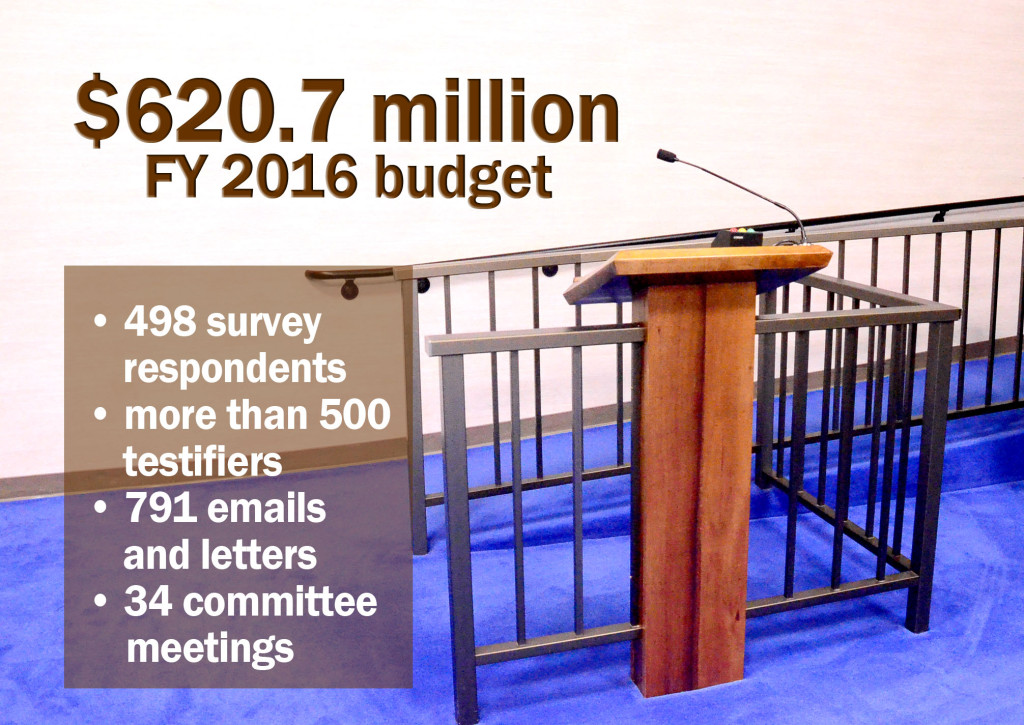 In verbal testimony from more than 500 people and in almost 800 letters and emails, many residents expressed similar views. The council amended the mayor’s budget proposal by reducing real property tax rates for all classifications, resulting in savings of nearly $11 million for county taxpayers.

Notwithstanding the mayor’s objections, the council insisted on more transparency in county finances for the upcoming fiscal year by requiring council approval to transfer money from one general category (such as salaries) to another (such as equipment).

To continue to facilitate public participation and openness in county policymaking, I have directed council staff to implement new online tools. Working with a nationally respected company called Granicus, the council will begin the process to establish a system that will allow residents to visit the council’s website and instantly track the status of pending legislation, review reference documents and submit testimony.

Council members recognize Maui County residents are busy with careers, school and family and in some cases live far away from the county seat of Wailuku. So we are striving to make it easier to watch and get involved with the council’s work, at any time and from any location.

With tools provided by Granicus, the plan is for council meetings to be streamed in real time, without commercial interruption, for viewing via computer, tablet or smartphone. Residents will be able to access the same bills, resolutions and meeting packets as council members.

Granicus has improved transparency for other legislative bodies in Hawaii and on the Mainland. So we are confident the new capabilities will be well received by residents. In the coming months, we will gradually phase-in the various tools and will keep you informed as they are unveiled. In the meantime, questions, critiques and other feedback will, of course, be welcome.

The council normally meets the first and third Friday of each month. Please note, however, the two regular council meetings next month are set for July 7 and 21.

The schedule changes have been made to accommodate the Independence Day holiday and council members’ travel to the National Association of Counties’ annual conference, which will be held in North Carolina from July 10 to13 with Maui County Council Member Riki Hokama presiding.

If you don’t have Fourth of July weekend plans yet, consider bringing your family to the 50th annual Makawao Rodeo and Paniolo Parade. More than 350 cowboys and cowgirls will gather at Oskie Rice Arena for a wonderful Upcountry tradition.

* Mike White is chair of the Maui County Council and vice chair of the council’s Budget and Finance Committee. He holds the council seat for the Paia-Haiku-Makawao residency area. “Chair’s 3 Minutes” is a weekly column to explain the latest news on county legislative matters. Go to mauicounty.us for more information.